A new scandal has rocked the Federal Security Service (FSB) after seven of its operatives were detained in Moscow over an alleged robbery. Following the case, FSB veterans have warned about criminals infiltrating the agency.

A total of seven FSB operatives, including members of its elite counterterrorism units, were detained in Moscow last week. The officers are suspected of involvement in a large-scale robbery, having allegedly snatched some 150 million rubles ($2.5 million) of shady origin from a private business. 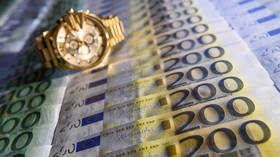 They have been charged in connection with a single case of armed robbery, a source close to the investigation told TASS on Thursday. So far, no other malicious activity by the group has been uncovered.

Five of the suspects are being held in detention facilities, while the other two have been placed under house arrest pending trial. The case could yet transpire to be even bigger, as Russian media reported that investigators have named eight more suspects, all of whom are also FSB officers.

A string of high-profile cases have rocked Russian law-enforcement agencies recently, and have been described as very troubling by veterans of the Soviet-era KGB – the predecessor of the FSB.

The unfolding case of the FSB brigands, as well as the recent arrest of FSB Colonel Kirill Cherkalin, who possessed a record-breaking pile of cash, signals some serious issues within the agency, retired KGB major general Alexandr Mikhaylov told the Moskovskiy Komsomolets newspaper.

“Recently, weve seen arrests of bigwigs, who amassed crazy amounts of shady money. Today – this,” said Mikhaylov, who served with the KGB from the late 1970s until the early 1990s.

The scale of corruption within the security agencies was nothing back then compared to modern times, the KGB veteran claimed. “During my whole service with Moscow KGB – and Ive worked there for 20 years – there were only three criminal cases. One was about high treason and two general criminal cases – it was very small-time,” Mikhaylov added.

The situation is very troubling. No one among the old guard understands where such a number oRead More – Source