As thousands of anti-government demonstrators rallied in Baghdad's Tahrir Square — the epicenter of the protest movement — the gunmen seized a nearby parking garage that is used by activists.The gunmen have not yet been identified.Hundreds of members of pro-government militias have descended on Tahrir Square in a show of force over recent days, raising fears over further unrest, several activists told CNN.During his weekly Friday sermon, Iraq's top Shiite cleric warned against meddling, saying that the country's new premier must be chosen "without any foreign interference." The clock is ticking for lawmakers to replace Prime Minister Adil Abdul Mahdi, who announced his resignation last week, calling on Iraq's government to "preserve the blood of its people" and "avoid slipping into a cycle of violence, chaos and devastation."News of Abdul Mahdi's departure was greeted in Baghdad's Tahrir Square with fireworks.Grand Ayatollah Ali al-Sistani has previously condemned the killing of unarmed protesters, as well as the government's failure to handle the demonstrations, sparked over endemic corruption, high unemployment, inadequate public services and Iran's interference in the country. Protesters blame Iran for being complicit in the Iraqi government's failures, and now its crackdown.Al-Sistani's remarks came on the same day that the United States imposed sanctions on four Iraqis, including "three leaders of Iran-backed militias" over corruption and human rights abuses. According to a statement released by the Treasury Department, the militias were behind the killing of dozens of peaceful protesters. 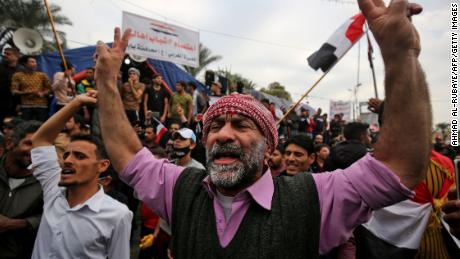 "Iraqis have played a step and bloody price" because of the Iranian regime's involvement in the country, assistant secretary of state David Schenker said.Read More – Source

Israel is winning on the world stage, but losing the plot at home

Iran-Iraq war: Looking back at the chemical bombing of Sardasht

In political turmoil and economic collapse, Lebanon could now be overwhelmed by Covid-19