Protesters were seen attacking bank branches and smashing the windows of one prominent cell phone company.Some threw Molotov cocktails and rocks at police, who attempted to disperse protesters with tear gas. As clashes continued, security forces deployed water cannons and rubber bullets.Hundreds of people have been injured in the chaos, according the Lebanese Red Cross, which comes after months of mostly nonviolent demonstrations over the country's continued economic failings. The banking system has all but collapsed and Lebanese citizens have a monthly withdrawal limit worth around $200. The nation's currency has lost 60% of its value in the months of tumult, as prices soar and people are left unable to pay their regular bills.Lebanon's President, Michel Aoun, called on the country's army and security forces to impose order. 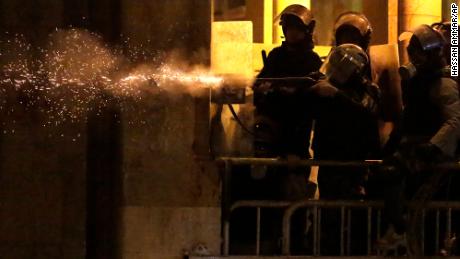 Protesters declared the "week of rage" on Tuesday, angry that the government has failed to stymie Lebanon's descent into economic crisis. Prime Minister Saad Hariri resigned in late October in response to the initial protests, but Lebanese lawmakers have been unable to form a legitimate government in the three months since to tackle the economic issues still plaguing the country. Some protesters who spoke to CNN said they've decided to use new tactic that includes employing more violence in order to spur quicker change, as the situation has mostly stalled since Hariri's resignation. Hariri, who has been ruling a caretaker government since his resignation, issued a statement calling events in downtown Beirut an "unacceptable scene that threatens civil peace."Amnesty International and Human Rights Watch both issued statements accusing police of using excessive force. "There was no justification for the brutal use of force unleashed by Lebanon's riot police against largely peaceful demonstrators in downtown Beirut on January 18 (Saturday)," Michael Page, Human Rights Watch's deputy Middle East Director, said in a statement. "Riot police showed a blatant disregard for their human rights obligations, instead launching teargas canisters at protesters' heads, firing rubber bullets in their eyes and attacking people at hospitals and a mosque."Read More – Source

Accident or sabotage? What we know of incident at Iran’s Natanz nuclear site