Diesel oil from a huge spill in Russia’s Arctic north has polluted a large freshwater lake and there is a risk it could spread into the Arctic Ocean, a senior Russian official says.

Emergency teams are trying to contain the oil, which has now travelled about 20km (12 miles) north of Norilsk from a collapsed fuel tank.

It is the worst accident of its kind in modern times in Russia’s Arctic region, environmentalists and officials say.

The oil started leaking on 29 May.

So far about 21,000 tonnes have contaminated the Ambarnaya river and surrounding subsoil.

Investigators believe the storage tank near Norilsk sank because of melting permafrost, which weakened its supports. The Arctic has had weeks of unusually warm weather, probably a symptom of global warming.

The power plant where it happened is run by a subsidiary of Norilsk Nickel, the world’s leading nickel and palladium producer.

Lake Pyasino serves as the basin for the Pyasina river, which flows to the Kara Sea, part of the Arctic Ocean. From October to June that river is usually ice-bound.

“The fuel has got into Lake Pyasino,” said Alexander Uss, governor of Krasnoyarsk region.

“This is a beautiful lake about 70km [45 miles] long. Naturally, it has both fish and a good biosphere,” Interfax news agency quoted him as saying.

“Now it’s important to prevent it from getting into the Pyasina river, which flows north. That should be possible.”

The pollution “will have a negative effect on the water resources, on the animals that drink that water, on the plants growing on the banks”, said Vasily Yablokov of Greenpeace Russia.

Greenpeace has compared it to the 1989 Exxon Valdez disaster in Alaska. 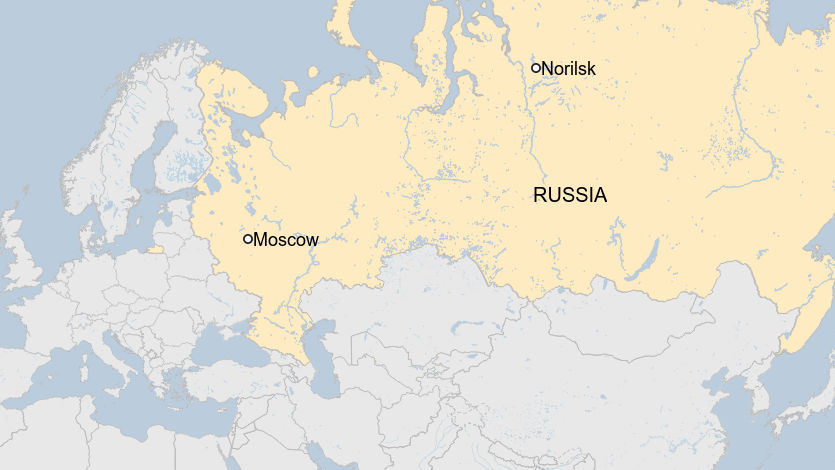 Delays over reporting the collapse angered President Vladimir Putin and the power plant’s director, Vyacheslav Starostin, has been taken into custody.

The Russian Investigative Committee has launched a criminal case over pollution and alleged negligence.

The term is used for ground that is frozen continuously for two or more years.

Some 55% of Russia’s territory, predominantly Siberia, is permafrost and home to its main oil and gas fields.

A 2017 report to the Arctic Council, an international forum which includes Russia, warned that because of global warming and melting ice, foundations in permafrost regions could no longer support the loads they did as recently as the 1980s.

A recent report by Bloomberg news agency points out that Russia’s newer oil infrastructure takes account of the changing climate: storage tanks on the Yamal Peninsula, for instance, are mounted on piles.

In a statement, Norilsk Nickel said the incident had been reported in a “timely and proper” way. The company has pledged to pay for the clean-up, estimated so far at $146m.

Norilsk is already a well-known pollution hotspot, because of contamination from the industry that dominates the city.

In 2016, Norilsk Nickel admitted that an accident at one of its plants was responsible for turning a nearby river red.

“We can see a large concentration of diluted oil products beyond the booms,” she said.

Kremlin defends Moscow against criticism of move to lift lockdown